My Girls Made It!

Well Friday the girls decided they wanted to do one of their favorite things...watch crafting videos on YouTube! Then they pick what project they want to make & promptly begin to tell me how to do it. Oh Yes, YouTube makes them a crafting expert! LOL! The ornament from the cover of the Holiday catalog was the winning project. Let me say this, it was quite the adventure. First they chose what colors to use. #2 chose Pumpkin Pie & Crumb Cake. #3 chose Pool Party & Real Red. They stamped 20 of each of the large & small ornaments, then we had a catastrophe...#3 spilled a cup of water all over her project. She had a melt down! It took them quite awhile to stamp all those ornaments & she was devastated. Of course I told her not to worry & I would restamp the ornaments for her. So with in a few minutes she had all her ornaments back & we were ready to move on to the next step of die cutting them all. This turned out to be too much labor for #3 & after doing half of them she escaped to go play outside. But #2 was set on finishing her project so she die cut them & I folded them. Then she put them all together like it showed in the video. Then came her favorite part GLITTER! Next time we have got to put down lots of newspapers, I am still cleaning up glitter 2 days later! Anyway back to our adventure. Time for assembly! I worked the hot glue & she did the rest. Of course she had to have a bow, crystal button, & pearl so I helped her get that together & we were done...4 hours later!!! But it came out SO pretty! 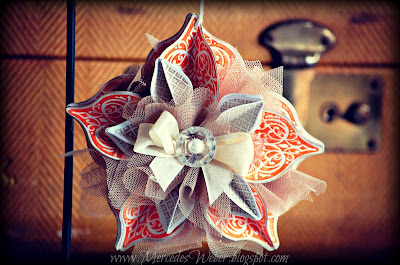 I started making mine & I think with out any little helpers I can complete it in less than an hour so don't be afraid to make on of these beauties! Especially since when you purchase the supplies to make it you get the Festive Paper Piercing Pack FREE! 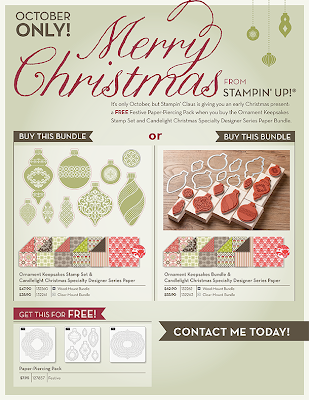