I have been performing my juggling & high wire act in the Weber family circus again! Not literally of course but that's what it feels like. I need a VACATION!
Anyway...I wanted to pop in & share a little. 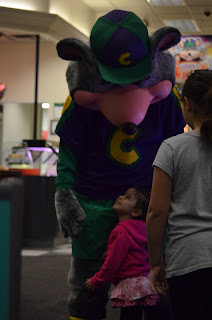 #4 had a great time at Chuck E Cheese. I decided since they were having a birthday party over the weekend that I would make a cake instead of ordering one. Lets just say I was reminded why I don't make cakes. LOL! It tasted fine but it was NOT pretty. Ok on to the party details. Since #2 & #3 have their birthdays so close to Christmas doing a big party in December usually doesn't happen so this year we decided to have one party for all of them in January. They had a blast! But I was absolutely worn out by the end of it. Whew! I haven't been that exhausted & had so many body parts hurt at once in a looong time. They are totally My Little Pony fanatics so that was the party theme. Of course the local party stores could not make my life easier & stock such items...but we did find some stuff on the internet & we did a little DIY stuff. The girls had some stickers & I found some really cute blank cupcake picks that happened to fit my 1" circle punch perfectly so we punched out some of the stickers & made these... 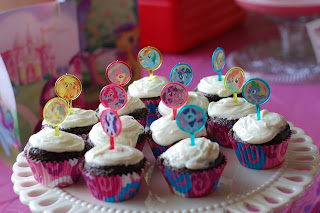 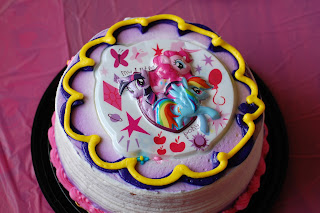 The cake was so yummy! It was white cake with fresh strawberries inside & whip cream icing. Mmmmm! I found the plastic pony decor on line & popped it on top of the cake. I wish I had taken more pictures but I was running around like a crazy person the whole time. 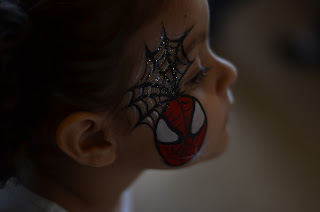 One of highlights for the girls was the face painter! Yes #4 got Spiderman! Another of her favorites! Weird because she has never seen any Spiderman cartoons or anything but she is currently refusing to take off her Spiderman pajamas that we bought yesterday at Old Navy. Everyday she pretends to be a different character which ranges from Rainbow Dash, Simba, Baby Bear, Spiderman, Puppy, & a few others. And watch out if you call her by the wrong name, sheesh! 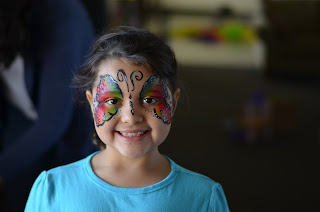 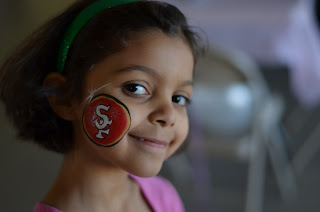 #2 got a pretty butterfly & #3 got the 49ers logo, she is a big football fan! Anyway enough about the fam how about some super fun NEW RUBBER!!!! SU just released 2 new stamps sets! I am totally drooling over the Sent With Love set! OMGosh can't you just imagine sending your bestie a super cute card & stamping the envelope with the adorable "Please Deliver To"!!!  And this set has matching DSP...Yes, Please!
The second new release is the February Best of 25 Years set! Just in case you missed the January set, its still available! Click Here

Ok I guess that's all I have going on for now but I will be back soon with some new cards!
Hope your weekend is great!
at 6:30 PM